I just posted two new working papers that are intended for inclusion in an upcoming edited book entitled The Enigma of the Event: Moments of Consequence in the Ancient Southeast.  The first (“Event and History in the Precolumbian Southeast”) is the introductory chapter written by myself and Jason O’Donoughue.  In it, we discuss broadly the nature of the “event” as a historical category as well as its potential utility in archaeological investigations of “prehistoric” social dynamics.  The second paper (“Subterranean Histories: Pit Events and Place-Making in Late Archaic Florida”) focuses on the eventfulness of Late Archaic (Orange Period) pit digging and deposition practices at the Silver Glen Run complex in northeast Florida.  I argue that these seemingly ordinary acts actually constituted important historical occurrences due to the influence they exerted on future patterns of practice, at both local and extra-local scales.

Any comments or suggestions on either/both of the papers would be greatly appreciated.  I am especially interested in hearing opinions regarding the manner in which we frame the event as a concept, as well as any critical viewpoints or references that we may have missed. Thanks in advance! 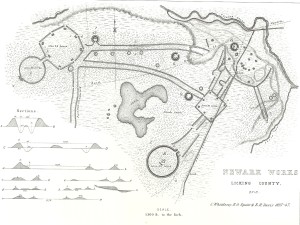 Newark Earthwarks from Squier and Davis (1848)

Southeastern archaeologists are second to none when it comes to identifying continuity and change in the archaeological record. By carefully documenting material culture variability, generations of culture historians have isolated regionally and temporally specific cultural traditions that have served as a basis for relatively dating sites and for recognizing interactions between them. The importance of identifying such changes (or lack of changes) can’t be overstated, but, now that these culture history frameworks are fairly well established, we can start to ask not just what happened in the past, but how and why it happened.

One of the ways that archaeologists have been tackling “how” and “why” questions is through the concept of “the event,” which appears to have gained some traction in the Southeast as evidenced by a symposium dedicated to “the enigma of the event” at SEAC in 2011. [Full disclosure here: my advisor is Rob Beck, a major proponent of event theory. We talk about “the event” a lot. Just figured readers should be aware of any resulting biases.]  Derived from the work of sociologist William Sewell, Jr.,  “eventful archaeology” considers how particular episodes of crisis (i.e., events) lead to disconnects between resources (the capacity to command actual/material things or people) and schemas (generalizable, overlapping rules that guide and are guided by the allocation of resources, and that enact and reproduce social life). Because resources and schemas together constitute social structures, their disarticulation is a big deal, with the potential to critically undermine existing forms of social, political, economic, and ideological organization. Since this sort of disjunction can’t be tolerated for long without a social breakdown, events encourage social actors to creatively articulate resources and schemas in new ways, resulting in potentially profound changes in social structure.

Though I admit to rolling my eyes if I hear the words “resources and schema” too often, in general, I find an eventful approach to change in the archaeological record pretty compelling.  In my mind, it recognizes the constraints and opportunities afforded by social structures while still leaving room for agency. Moreover, the materiality of the articulations between resources and schema render events well suited to identification and interpretation by archaeologists.  The concept also is flexible enough to address many different kinds of events, from encounters with foreigners to the adoption of novel subsistence practices (e.g., Beck et al. 2007; Beck and Brown 2012).

One kind of event that I find myself considering these days is pilgrimage. Though it’s not a one-to-one match, Victor Turner’s description of the social dynamics involved in pilgrimage do, I think, resonate well with Sewell’s approach to events. Specifically, Turner stresses “the opposition between social life as it is lived in localized, relatively stable, structured systems of social relations – such as village, town, neighborhood, family, etc. – and the total process of pilgrimage” (1973:192). As I read it, this opposition might be characterized as an “event” in which the everyday articulation resources and schema go out the window, and become rearticulated to suit the pilgrimage experience. Turner elaborates (193-194) that the “direct, immediate, and total confrontation of human identities” during pilgrimage drives “the need to mobilize and organize resources to keep the members of a group alive and thriving and the necessity for social control among those members in pursuance of these and other collective goals.” What I’m left wondering is: what (if any) of the re-articulations between resources and schema that take hold in the context of a pilgrimage persist once the pilgrimage is over?  Can the “event” experienced by pilgrims lead to change in broader social structures, and if so, how?

Objectively speaking, I’m not sure… but my hunch is that yes, pilgrimage can have far-reaching effects on social structures. Consider, for example, the Middle Woodland Hopewell episode. Bradley Lepper (2004, 2006) has suggested that the Newark earthworks in Ohio do, in fact, represent a Hopewell pilgrimage center, given the labor pool necessary to construct its monuments, its diverse assemblage of exotic artifacts, and the presence of the so-called Great Hopewell Road extending out past the site. If pilgrims were in fact visiting Newark, where did they come from, for what reasons, and what happened after the pilgrimage was over? Did they take anything – objects, ideas, spouses, information – back home with them? If so, how were these incorporated (or not) into local social structures? We already know that Hopewell material culture (e.g., exotic raw materials, particular artifact types, certain forms of ceremonial architecture) is widely distributed across the Eastern Woodlands. Perhaps some of this spread results from the movement of pilgrims to and from Hopewell pilgrimage centers, rather than or in addition to the movement of Midwestern Hopewell travelers across the continent. This latter position has dominated the literature on Hopewell interaction for many years, and while it is certainly applicable to some cases (e.g., all that obsidian), I think it’s worth considering how other sorts of events may have contributed to social or religious change during the Middle Woodland period, particularly outside the Hopewell core.

At this point, I’m curious as to how to evaluate this idea against archaeological evidence. Turner’s recommendation that socio-cultural anthropologists study pilgrimage by first mapping total “ritual topographies” of pilgrimage centers, waystations, shrines, origin points, and trails. For better or worse, this seems out of reach for archaeologists, but there have got to be other options. If there are any thoughts on this front, or other comments, I would really like to hear them!

In particular – Maggie! You guys have been working on pilgrimage with regards to Poverty Point, yeah? How’s all that going?

Beck, Robin A., Jr., and James A. Brown (2012) Political Economy and the Routinization of Religious Movements: A View from the Eastern Woodlands. Archaeological Papers of the American Anthropological Association 21(1):72-88.

Lepper, Bradley T. (2004)  The Newark Earthworks: monumental geometry and astronomy at a  2006. The Great Hopewell Road and the role of the pilgrimage in the Hopewell Interaction sphere. In Recreating Hopewell, edited by D. K. Charles and J. E. Buikstra, pp. 122-133, University Press of Florida, Gainesville.